Ontario has so many unique geographical areas. One of my favourites is the Muskoka's.
Known best for it's stunning fall foliage the Muskoka's can offer some stunning colour in the spring. One just has to look a little harder. 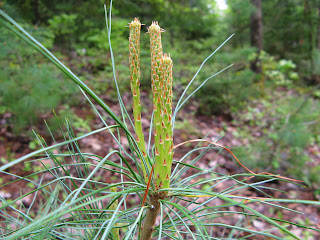 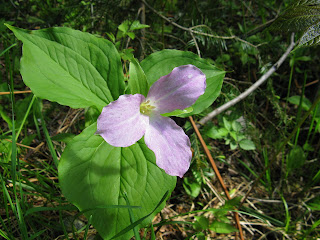 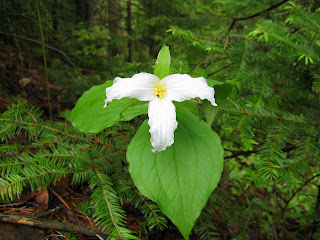 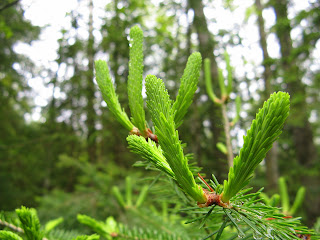 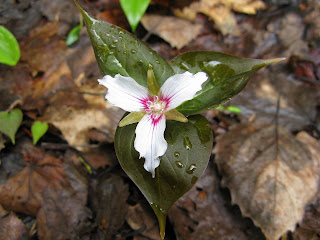 The end of the spring fishery markes the beginning of other passions...spending time in the North. I had the opportunity to visit The Bruce this weekend with a friend and help him with a cottage project.

We are blessed to live in such a beautiful province...
Posted by lambton at Sunday, May 10, 2009 1 comment: 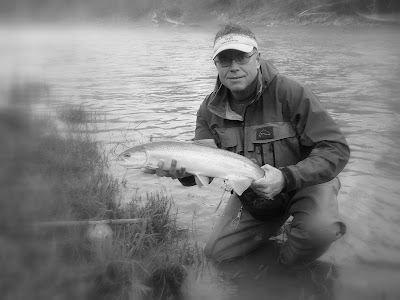 Well as fate and dumb luck would have it our little river embraced the precip from last Thursday and shot up in level. It was looking like she was going to come into shape for Sunday...

I was content on wrapping up my season when Harv threw out an invite to fish some time over the next couple of days. We made plans for Sunday figuring the river would have risen slightly and we would be in for a moderate flow of crystal clear water. 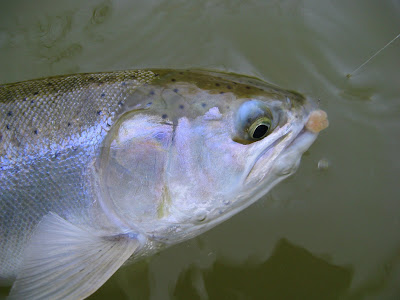 Miraculously, late Saturday afternoon the water site updated and it was overly apparent that the river blew out big time from the rain that was falling when I last left her banks. The graph was also indicating that she was going to be fishable but large and on the edge for vis. I quickly shot Harv an email informing him of the good news and to tell him to wrap up some larger bags for the big water. Harv replied back saying he had already tied up a bunch of bags and if need be would double bag or use what he refers to as Monkey Balls . LOL!!! Monkey Balls???WTF I thought to myself. 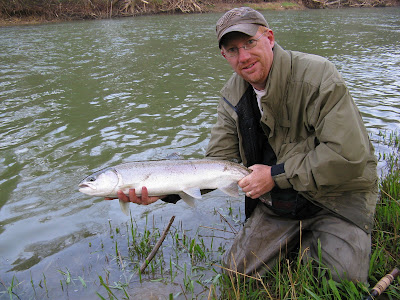 We met up at 5am Sunday morning at Northville and made the remainder of the ride up the lake where Harv explained the entire Monkey Balls concept. You see Monkey Balls is when you take two different coloured roe bags and put them on your hook. He continued to tell me the story of when he invented the concept while fishing with his dad. OMG...RUBE! I thought to myself. LOL!!!!!!!!
We arrive at the river and performed the ritual transformation into geared up fishing Nerds and made the hike back to the river. She was indeed large and had a greyish hue to her. Definitely fishable and would only improve as the morning went on. We decided on our starting point and made the river crossing over to the "New Run". The crossing was very tricky but we managed unscathed. It wasn't long before I hooked up with a torpedo of a Hen and put her on the bank. A few drifts later and I was into a smallmouth. We continued to fish and I hooked up again with a leaper that gave me a run for my money. 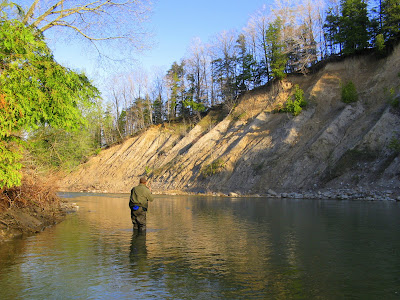 It took everything I had to keep the line tight as the fish raced towards me and eventually leaped and spit the hook. Good for him I said to Harv and we had a chuckle. Shortly after Harv hooks up with a hot fish that screamed downriver towards the overhanging tree. Harv manages to put the breaks on her then proclaims he hit this fish on Monkey Balls! "Monkey Balls" I yelled..."Monkey Balls" "Listen" I told him. "If you are gonna fish freaky shit like that you will not be allowed down here!" We shared a laugh. As Harv continued to fight the fish I broke out the camera and got the ordeal on video for the world to witness that Monkey Balls catch fish. OMG!!!!!
We fished the remainder of the morning with moderate success. We put a few on the bank and shared alot of laughs. We couldn't have asked for a better day. It was nice to have another crack at the home water in her prime. 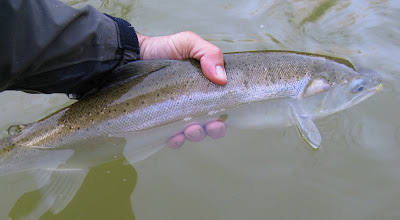