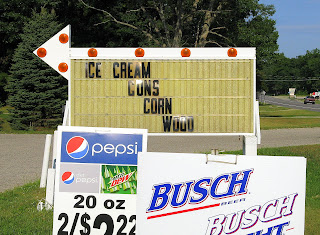 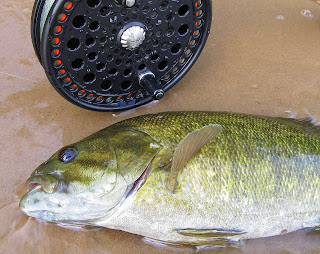 I awoke this morning at an unscheduled 7 am courtesy of the old school ring tone on my work Blackberry.  I pondered letting it ring and just rolling over and back to sleep before sheepishly reaching over and acknowledging it's existence.  It was indeed work in need of some assistance.  I guess my guys all let their phones ring and rolled over back to sleep once again outsmarting me.  After dealing with the issue at hand I decided I might as well make an early morning of it and get some coffee on.  After all we were at the cottage and the sun was just starting to poke through the trees surrounding the property. 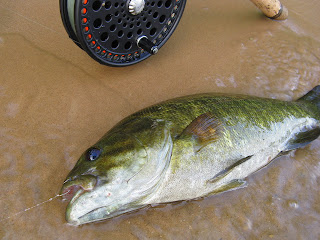 There is something to be said about waking before everyone else and having your morning coffee with nothing more than your thoughts.  I seldom get the opportunity at home but at the cottage I embrace the gift.  There is comfort in the silence here.  The days itinerary consisted of a trip to the garbage disposal, the township office,  and then an afternoon float down the big river in the Hyde. I knew my afternoon would be filled with fishing opportunity but for some reason the river was calling me this morning .  After a quick breakfast I informed my wife that I would be hitting the river for no more than an hour or two and would most certainly be back in time to run our scheduled day. 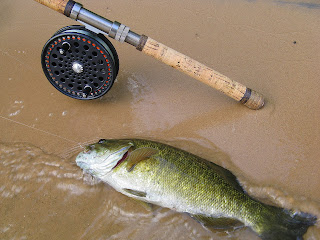 On the drive to the access I finalized my game plan an figured I would have no more than an hour on the water before having to make the hike out and drive back to the cabin.  Arriving at the parking lot I grabbed my gear and made the ascent to the river.  Arriving to the coffer I was astonished by just how many people were fishing the water I had intended on floating.  The river was pretty much locked down and I watched in disbelief as the fly guys and lure chuckers dealt their crafts.  After a couple of minutes I decided to call it and head back up the stairs to the van.  On my way back up I talked myself into having a look above the coffer.  Once again there were a few guys but plenty of room for me to put in a few drifts. 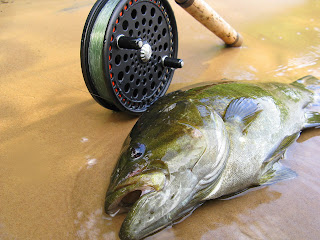 I paused in a state of indecisiveness as I was torn between making a feeble attempt at this water or hiking back to the car and getting on with the original game plan for the day. I started to make the climb up and turned back to the river for a few drifts.  I'm glad I did for it wasn't long until I discovered a steep drop off and current break that held a pod of Manistee Bronze.  Funny how things that seem to be working against you turn around for the better.  I spent no more than an hour down on the river and managed no less than 5 Smallies and a few browns.  I am not a bass guy but Smallmouth on the pin with the big rods are always a blast.  That's the best hour I've spent on the river all summer. And to think I almost bailed on the entire opportunity.
Posted by lambton at Sunday, July 31, 2011 No comments: 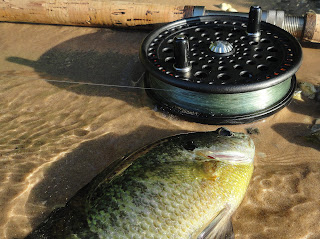 After another day of heat and an impromptu trip into Traverse for some shopping and diner I earned the remainder of a fast dwindling summer evening on the river.  I would have never imagined my quarry for the evening would be Bluegills but once again the big river surprised me.  Large gills,  light line, fast water and the center pin can pass the time quite nicely.  I had plans of targeting big Gills on Pine Lake earlier in the Summer but this didn't pan out. 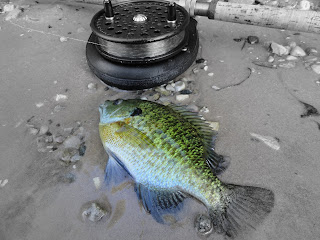 I would have never guessed I would have found them below the coffer.  Some of the colours on these fish are quite impressive and from what I gather they taste phenomenal.  Some day I guess... but for now they are all back swimming chasing bugs and other aquatic critters.
Posted by lambton at Saturday, July 23, 2011 1 comment: 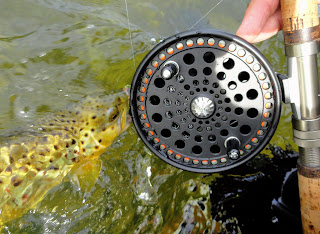 The humidex hit 45 C in Sarnia today.  That's 113 F for my metric deficient friends.  At least 10 cities in Ontario posted record high temps.  Luckily for us we left the hustle and bustle of everyday life a few days early and escaped to the cabin for an extra long weekend on the West Side. 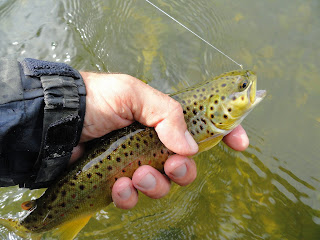 Today the beach was calling and the clean cool waters of Lake Michigan  kept the scorching temps at bay.  After spending the best part of the day on the beach with the girls I managed to slip down to the river to spend some time waste deep with my thoughts and a few finned friends. 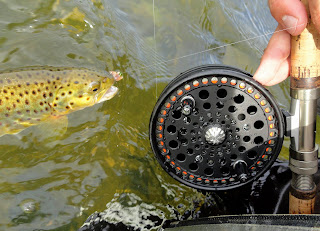 The pinnacle of Summer presents it's own challenges when chasing trout but determination and fine tools always meet the mark.  Today the Imperial once again proved it's place on the river and together we managed to fool a few Summer Browns.
Posted by lambton at Thursday, July 21, 2011 4 comments:

Breaking in the Imperial

With the Imperial in hand I had been wanting to put some river time behind her.  Summer isn't the best time for a die hard Great Lakes Steelheader to get a new toy but here on the West Side of MI there always seems to be some options.  Armed with a couple of tips from fellow bloggers indicating the Skams were in the river I managed to slip down  this afternoon for a couple hours.  The trip intentions were two fold.  First off I was wanting to put some river time on the new Imperial and maybe capture a few images of her in action.

Secondly I was hoping to pull a rabbit out of a hat and find one of those Skamania to tangle with.  My confidence really wasn't all that high.  The fish seemed to enter the river late last week and the high temps and full sun of the day wasn't going to work in my favour.  Nonetheless there are always fish to be had down below the coffer and I was determined to spin the new toy.

The game plan was simple.  I was going to wet wade the river and pick away at the fast water and seams below the coffer and work my way down to the buckets and troughs behind the gravel pile-ups to the first bend.  As expected the reel performed flawlessly and my choice of a rear mounted clicker option couldn't have been better.  The clicker is rock solid and operation is very intuitive.

The center nut proved true to it's function and a much needed reel flush was as simple as could be.   The reel is a runner and will certainly do me proud when the runs start this fall.  I didn't manage to find that elusive Skammie but I did find everything else under the sun from Browns, Rainbows, Small Mouth, Red Horse Suckers, and even a catfish.

It was time well spent on the river and nice to put the new toy through the paces.

With minor production delays and an unexpected Postal Strike the Imperial finally found it's way into my my hands.  I can say without a doubt that it was well worth the wait.  The redesigned center spool nut adds an unrivaled touch of class and functionality.  The reel is simply a piece of highly engineered art.  It has completely surpassed my expectations.
Finally my vacation arrived and I got some time to spool her up.  She is ready for the river and with some luck I may find an hour or two later today to put some drifts behind her.  Fingers crossed!!!!
Posted by lambton at Thursday, July 07, 2011 2 comments: