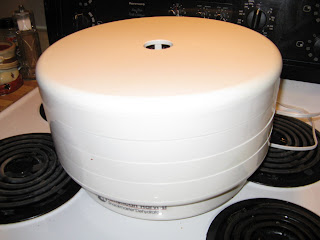 Beef Jerky...Nothing says POS Redneck Rube like Jerky. Oh God I love my Jerky. So much so that I got inspired a year or so back and started making my own. Sounds involved but seriously a simple simple process. The only important component is the dehydrator. 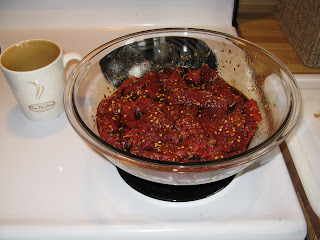 I know Jerky can be made in the oven but a minor $20 investment in a used food dehydrator will pay dividends in execution and clean up.
The only problem with making your own Jerky is you end up eating it all or if you are silly enough to bring in a batch to work everyone becomes your best friend. LOL!!! 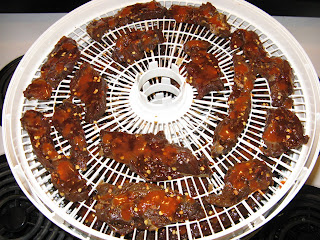 Next to Bacon there is no better food group. God Bless Cows and God Bless Beef Jerky! 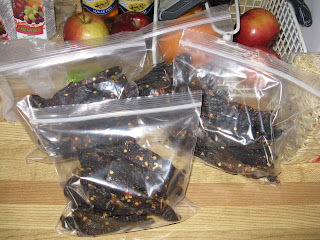 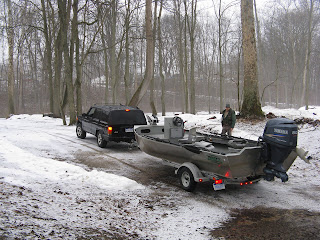 With the early lockup and demise of the Ontario 2008 extended season and what seems like the worst winter in measurable mental record I have been feeling in dire need of another day on the water. Back in early January we were very fortunate to have had the opportunity to meet and fish with Jeff Stuhan out of Newaygo Michigan. As you may recall Jeff runs Jeff's Guide Service. That trip was nothing short of spectacular and had left me with a burning desire to return to the Muskegon for another round. As life would have it a deep freeze set in after our first trip and the lower river was locked up solid. This was to drastically change last week with the giant warm spell and rapid melt. The Western MI tribs all blew out huge and the MO was looking like it would finally fish this week. With the weather forecast in mind it played out that today would be our best shot at hitting the big river once again. I put the call out to Jeff and was graciously invited over for another day of fun. Norland had bowed out this trip and a friend from work was very eagar to take up the invitation.
We arrived to the river bank around 9:30. The temp was hovering above freezing with a slight haze and drizzle of rain. The river had dropped a foot from the day prior with the closing of one of the flood gates up at The Croton dam but the water was still a foot higher than our last trip. The vis was a good 3ft but the flow was rockin at 3750 cfs. We knew we were gonna have to put in the leg work for some fish.
Having fished with Jeff before I knew he would put us on some fish and my confidence level was in check. It was not long after arriving at our first run of the day that I hooked into a very chrome hen and successfully brought her to the net. 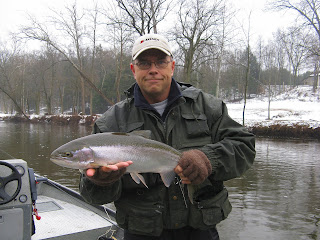 There is no better feeling than boating the first fish and shaking that funk. After a quick grip and grin she was sent on her way. The remainder of the day was to deteriorate from this point onward. Not for lack of opportunity but for poor luck. My next fish was to come at our second stop. This fish was large and hot. Shortly after taking me down river the hooked released. Upon inspection I noticed that it had been compromised from an earlier snag in that run. These are the kind of lessons that always leave a sour taste in your mouth! I had the feeling that this fish was going to haunt me the rest of the day. A dozen or so drifts later and Red hooked up only to bring a 12" MO Sucker to the boat. I pleaded desperately for a photo op but was granted the back of his head and a middle finger prior to the fishes prompt release. We continued to work the runs hard to no avail when Red hooks up on a solid fish. Once again after a brief encounter the hook pops and we are left with memories of a sudden roll and flash of chrome. The remainder of the outing we covered miles of river and threw what felt like a million casts to no avail. On the way back to the launch we stopped at one last slower water run. The water looked perfect and the pace was very nice. A few drifts on my desired line only delivered a brief snag in the same spot each drift. The fourth drift on the same line the float dips in the same spot I fail to set the hook and I relaxingly raise my rod to a fish. Not a second after a flash and roll the hook pops again. If Norland was there I'm certain it would have been followed by a verbal "USELESS" but since he wasn't Jeff filled in for him with some dramatic undertone. Sad Sad Sad story but Fun, Fun, Fun times. It's fishing gentlemen...not catching and we do need to be reminded of that from time to time. Today we were reminded a little too much in my opinion but hey...What the heck are ya gonna do. It's not like we didn't have our chances. It was a terrific day on a stellar river with excellent company. We saw some Swans and a Bald Eagle and I put one heck of a pretty hen in the boat. Not bad for February 18th in my opinion.

On a side note: I was talking to Jeff about his guide affiliations and dealer discounts etc. I happened to ask him about the Simms G3 wading Jacket as I had been seriously considering getting one. He informs me he has an XL Jacket at home that he doesn't use with a couple minor rips in the corner of the hand warming pockets. On the way back to our car at the end of the day he stops at his house and grabs it and gives it to me. Tells me to enjoy it. How's that for a stand up guy! This Jacket is in damn great condition and after a minor sewing repair will serve me well for many years. :0) Thanks Jeff!!!!
Posted by lambton at Wednesday, February 18, 2009 9 comments: