Well the post Xmas pre-New Years trip to the cabin has been challenging to say the least.  The past few days have bounced from positive 5C to -7C in less than 24 hrs.  Saturdays mild spell was reluctantly welcomed.  As suspected with positive temps come positive crowds.  The river was extremely busy.  I only had a few hours to burn so I poked around and managed to sniff out a couple.  One came to hand on an Atomic Orange Great Lakes Steelhead Co bead and the other got the better of me on my hand tied Olive Marabou jig.  It's too bad because it was a beast but was long in the drift and burning down river towards some wood.  I had to put the hammer down and the knot gave way and left the poor fellow with a dead sexy Marabou mouth piercing.  Sunday morning came and went and it was extremely hard to muster up the courage and ambition to venture out into the now sub-Arctic temps.  It wasn't easy but  I finally got my head around it and set forth towards the access.  It was now a little after 1pm.  Surprisingly the traffic was still on the heavy side at the parking lot but I suspected my water would be lonely.  Upon arriving at the bottom of the valley my suspicions were confirmed.  I dropped in and started to pick away.  I knew it was going to be tough and I was quite expecting a blank after two days of marginal success and the dramatic temperature swing brought on by this nasty cold front.  The winds were brutal and the guides were freezing up hard.  I stuck to my system and systematically went through all of my go to offerings and colours up and down the run.  After a good hour and a half my feet began to remind me that it was almost time to cut our losses.  I made my way to the bank to de-ice the guides and warm my now aching fingers and toes.  After a 15 min reprieve I decided one last go with what has proven to be "the money bead" for my 2013 season...The Atomic Orange.  The second drift in the float dropped. The Rod loaded up proud and the fight was on.  It was an incredibly exhilarating feeling and an instant reminder as to why we suffer through these extremes when everyone else is hunkered down in the warmth of their homes.  I half heartedly expected to lose this fish but lady luck must have been looking over me as I somehow managed to swing the magnificent hen to the bank.  I carefully positioned my reel for a few pics keeping in mind any water would instantly render it useless in these temps.  After my photo session I grabbed my the rod only to see the reel covered in ice.  The Mykiss is an outstanding float reel but certainly not one for the sub-Arctic temps.  I tried to thaw it out but each drift resulted in a re-freeze.  I was not about to complain as the entire ordeal was an outstanding way to end the 2013 calendar year over here on the West Side.  If I'm lucky I just might get out for a quick drift back home in Ontario before the extended season ends Jan 1st but that is highly unlikely.  2013 has certainly proven to be a challenging season...big rains, big water, big fish.
Posted by lambton at Sunday, December 29, 2013 2 comments:

Well the fishing opportunities have been far and few between.  This certainly is proving to be a challenging year.  First the rains kept us at bay for most of November and December proved to have it's own challenges with an early cold spell and lockup.  I was looking forward to my Christmas holidays and an opportunity to hit the big river over at the cabin.  Finally the time came and we hit the Interstate for the marginal 3.5 hr drive over to the West Side of the state.  Fishing on the Big Manistee has been challenging this year with the above average water flows and the up and down weather patterns.  The beads have been money for me but it can be far too easy to stray from the grass roots and what we know.  Last year it was all about the wax worm and I couldn't buy a fish on a marabou jig.  The year prior the jigs were on fire.  Earlier on in the fall I had some good luck on the standard olive marabou so upon arrival to the cottage I decided to whip a few up for Friday's outing.  Well Friday morning came and along with it 2 plus hours of shovelling.  A snow blower is now on the "must have" list of cabin related items.  Finally I arrived to the river shortly after 1pm.  There was a boat in the middle of the drift and almost entirely blocking any fishing opportunities in my favoured section.  I opted to fish above them with short drifts and wait them out.  They seemed preoccupied with smoking their pot and drinking beer than trying to properly present an offering.   I was certain my patience would pay off and equally certain the fish in this section were untouched.  Well not more than 15 mins later they pulled anchor and as their boat started to drift down with the current.  At the same time my rod loaded up nicely with the first steelhead of the day.  I didn't stay more than two hours but the Marabou hooked four fish.  Two Steelies, one of which exceeded 10lbs, a giant resident brown pushing 3lbs, and a surprise river Walleye.
Nothing like success on your own hand tied offerings.  Just goes to prove versatility is the key to success and one should always have options.  Keep true to your conviction and pound that water.  Odds are if your gut tells you there are fish there then there most likely are.  You just gotta put what they want in front of them with confidence. 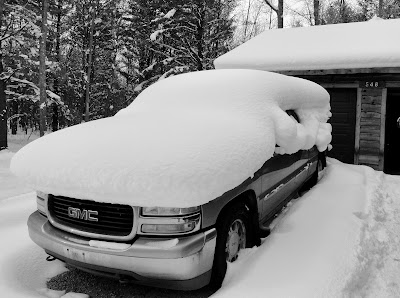 As I sit in the great room of the cabin and collect my thoughts I find it hard to commit to the task at hand. The allure of the woodstove is hypnotizing and my now tired and weathered body beacons for anything but the concentration required to put together this entry. It's hard to believe that it has almost been a month since I was last here on a fishing adventure. 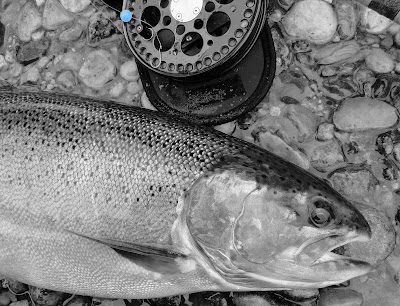 I find it hard to distance myself from this place for any lengthy amount of time but commitments kept me at bay until this week. I was anxious to get up and check on things after the early deep winter lock down we have been experiencing and equally as eager to wet a line in pursuit of some winter Steel. 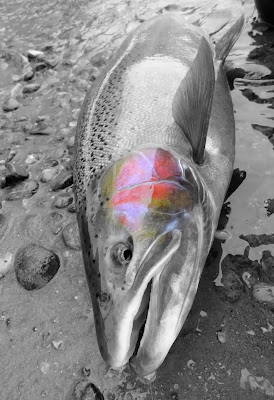 I arrived late Wednesday evening and was pleased to see the new plow guy had been and gone. I unloaded the truck and settled in for the night. The morning came early and with it some much neglected chores. The cottage Truck was almost buried under a foot of snow and practically begging to be shovelled out. The Backup generator had a warning light on the display and beckoned for some much needed attention. Finally a few overdue bills needed to be paid before any fishing adventures could even be considered. 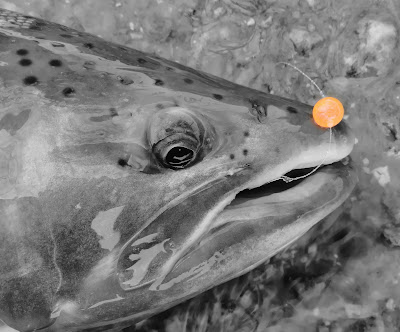 Well the snow was heavy, the truck battery was dead, and the Generator required an hour or more of attention. It was noon before I hit the river. I had all intentions of pulling the Hyde out of the garage and taking advantage of the predicted mild reprieve but after the morning chores I didn't have it in me to put forth the effort. I threw the gear in the truck and made my way towards tippy. 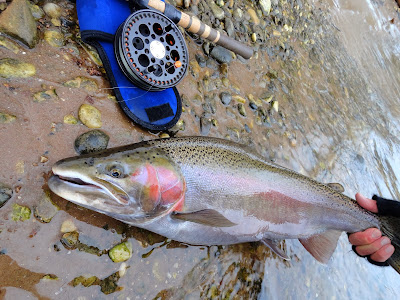 The late start didn't phase me in the least. After all it was Thursday, still damn cold, and mid day. The section of river I wanted to fish was only to be shared with one other gentlemen. The bite wasn't epic but I managed to put a few to the bank before my frozen feet finally made me succumb to old man winter . 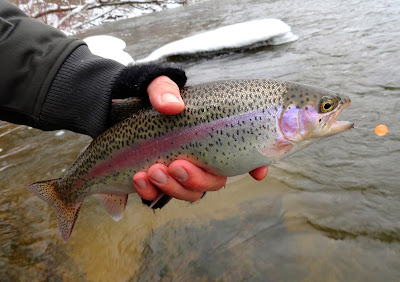 Today the Great Lake Steelhead Co. Atomic and Glow beads were the ticket. Orange and blue seemed to grab their attention. Winter fishing is a double edged sword...On one side the solitude it affords is priceless but on the other the extreme elements take their toll on the body. 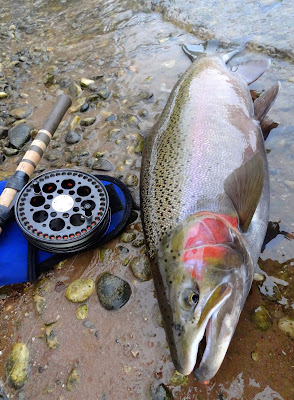 It's always worth the price of admission but each year gets harder. 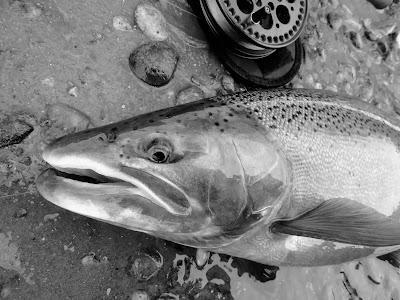 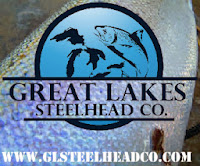 Hey... my buddy Zack Rayno at Great Lakes Steelhead Co. has a cool Christmas contest running that affords one the opportunity to win a bunch of really cool quality Steelhead Swag.  There ain't nothing better than free gear!  Check it out...His beads are the Cat's A$$ and really put the fish on the bank. Cross your fingers and get your best guess in on this contest.  Good luck!!

CLICK HERE FOR CONTEST LINK
Posted by lambton at Monday, December 16, 2013 No comments:

One more tight to the wood...

Had the opportunity to hit the home waters with Norland recently...Things started out slow but sure came around with a little determination. The Trick Em beads Zach Rayno sent me from Great Lakes Steelhead Company were the ticket on this outing and once things warmed up a bit and I dialed in the right colour it got really weird!!!! If you haven't tried their beads make sure you look them up. The Atomic and UV colours are amazing and have been consistently hitting fish for me and my friends on the Lake Huron and Michigan Flows. The highlight of this outing came at the end of the day. I was done and broken down watching Norland search for his closer fish. He made his way up to the top of the run and floated two nice drifts to no avail. You could see a sense of disappointment in his demeanor. He looked at me and proclaimed he was all done and was gonna break it down when I prompted him for one more final throw tight to the wood. Well as fate would have it in the 11th hour at the bottom of the drift the float dropped. After several intense moments and what seemed an eternity the 29" Huron Buck came to hand. Fish of the season on the Huron Tribs for our travels. A Great way to end the day and something I'll never let him live down! That biatch owes me one!!!
Posted by lambton at Tuesday, December 03, 2013 1 comment: