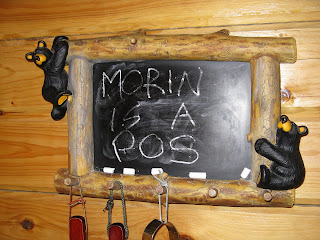 With the discovery and exploration of MI’s Westside tribs over the past 3 years had come a sense of rejuvenation for the spring fishery. Chasing fragile beaten up Dropbacks while getting eaten by blackflies after the Last Saturday in April had pretty much lost all of its appeal. The Western Rivers of MI never close so the opportunity to fish these systems at their peak is essentially a 4 hrs road trip away. We set out on one of these escapes this past spring. The Road Trip of 2009 will hold a place in my heart forever. It was one of those trips that came together perfectly and played out better than any of the Rubes that participated could ever have hoped. The location, accommodations, and fishing were all World Class. The three gentlemen that I surrounded myself with could not have been better company. The food and drink were outrageous and the laughs were gut-wrenching. I am a lucky person to have friends who appreciate these opportunities as much as I and can only hope to pull off many more such trips in the future.

We arrived to our destination about two hours after light and decided to stop by our accommodations first and unpack the van and get things situated. I don't think any of us were expecting just how stellar the log cabin was. For a brief moment I was actually concerned that we may not make it to the river that day in lieu of lounging around the fireplace drinking beer and telling stories. 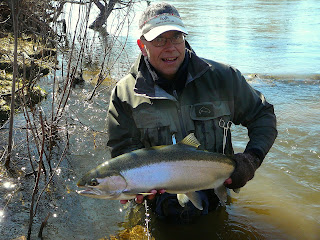 After getting everything situated we geared up and made our way towards the river. We stopped in at the Sawdust Access point and all agreed this would be a nice place to start and leisurely made our way down to the river. By now it had to have been 10 am or so and a beautiful sunny spring day was unfolding. The sky was a crisp blue with a moderate chill in the air and the birds were singing. Life is good. Norland and myself headed down river while Harv and Arn worked their way up. The State of MI manages these public sections and have constructed walkways and stairs down to favored fishing spots. It really gives the newcomers a road map as to where to approach the river. Norland slipped down one of these such stairways as I worked my way about 50ft past and did the same. After a few drifts Gene was hooked up and blew a fish. A few drifts later he was hooked up again and I headed back to help him land the fish.
It was a nice fish and officially started the trip for us. 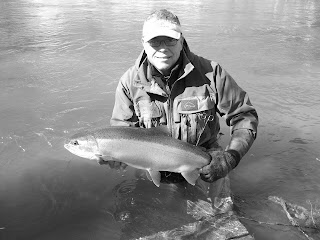 Being the way he is Gene insisted that I drop in and give this run a go as he had a feeling the fish were stacked in there. It was a very cool drift. There was a long tree running parallel to the bank about 15ft out. The river silt had filled in on the bank side of this tree but on the river side it was carved out and deep. It was a natural line to drift and provided terrific holding opportunities for these fish. I cast my float slightly up river with all intentions of drifting this line. Sometimes I think Norland enjoys watching me fish as much as he enjoys fishing himself so my float had both his and my full attention. As my offering made it's way to the start of the tree it disappeared and Norland yelled "FISH!!!" as I set up on it. Immediately this fish started to sound into the depths and park itself into the current. I had the big stick and was feeling helpless. I knew it was going to be a good fish. 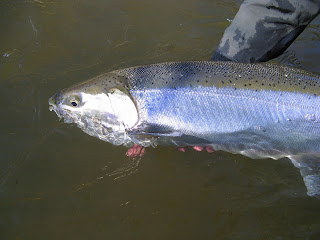 I just hoped we would get a glimpse of it. As much as I tried I could not get this fish to the surface. By now HARV and Arn had made their way back and were watching the entire event unfold. We were just starting to make ground. Norland dropped into the river and worked hard for the assist. I'm sure it was a sideshow act but we managed to swing her into Genes grip and were astounded by what we had landed. Here before us was a Tank of a fish. I don't know how else to describe her. She was just one giant solid tank of a fish. Long, thick, and nasty. Definatlely a compliment to her species. To date this is one of the largest and most beautiful Steelhead I have ever caught. That and the fact that she was caught in one of the most beautiful places to fish in the Greatlakes and in the company of great friends makes this fish and experience my #2. 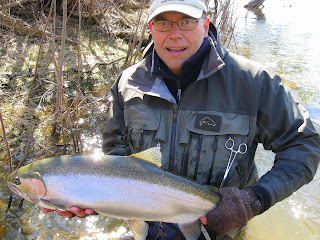 The remainder of this day and trip played out incredible. We all managed plenty of fantastic fish. The food and drink were out of this world. The scenery was second to none and the accommodations had us feeling like millionaires. Truly the epitome of a Steelheaders dream trip and a memory I cherish and will never forget.
Posted by lambton at Monday, January 11, 2010

I was expecting to see that fish near the top of the list.

your hyperlinks are killing me......

Ya that fish was ridiculous. Can't wait until March/April 2010.
Good times to come...

Now that is what I call a HOG!

That will teach me for being generous...
jk..
I knew that fish would be close to the top if not the champ...but for the record I agree with your rank...
You have to go with the homeboy or it is just bad Karma...
Ice fishing was a hoot today BTW.

I'm convinced!
I think western MI is in my future!
Soon!!

Bill,
Every diehard Great Lakes Steelheader owes it to themselves for at least one yearly trip to the West Side. It is a crazy Spring Fishery from shore and the Fall can be ridiculous from a boat in the lower river I'm told. The region is beautiful and one gets blown away by the amount of gravel and crystal clean water. Simply put it is a piscators paradise.