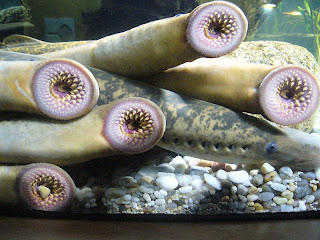 The opening of the Welland Canal brought great economic prosperity to both the US and Canada. The Canal provided a means to economically transport commodity items in mass via giant Lake Freighters to the World. Prior to the canal such shipments were impossible due to the unsurpassable Niagara Falls. The Canal was an engineering marvel for its time and brought great economic opportunity for the Great Lakes but it also opened up a navigable waterway for invasive species and resultant detriment to a healthy fishery. The worst of these alien attackers proved to be the Sea Lamprey. Prior to the Canal Sea Lamprey were native to much of the Eastern Sea board and also found residence in Lake Ontario. Because of the natural barrier at Niagara Falls they had not penetrated the Upper lakes. With the opening of the Welland Canal this was all to change.


Sea Lamprey are a voracious parasitic predator native to the Atlantic ocean. Like the Salmon and Steelhead it is an Anadromous species finding itself living/feeding during it’s adult life cycle in the lake or ocean and returning to the rivers and streams to procreate. The Lamprey has a suction cup like mouth lined with razor sharp teeth and a raspy tongue. The Lamprey aggressively attaches itself to a host where it carves away the outer scales and flesh to actively feed on blood and bodily fluids. An anti-coagulant exists in its saliva to aid in the process. As many as 1 in 7 hosts will die from Lamprey attacks. During one Lampreys life cycle it can consume and destroy as much as 40 lbs of fish. The entire lifecycle of a lamprey can range from 5 to 8 years with 12-20 months spent in the adult stage of the cycle in the lake feeding. They migrate and spawn in freshwater rivers where larvae hatch in the tens of thousands. This Larvae resides in the mud bottom of the rivers where it filter feeds for much of its existence before metamorphosing into voracious predators and head to the lake. 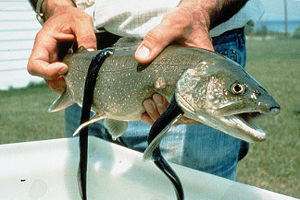 The Sea Lamprey began to enter Lake Erie in the early 1900’s through the improved canal. In the next 20 years they found a foot hold in Lakes Huron and Michigan. By 1946 they had invaded Lake Superior. By 1947 the sea lamprey had established viable populations thorough out the entire upper Great Lakes and were wreaking havoc on a the fishery. Between 1940 and 1950 the Sea Lamprey led to the destruction and collapse of a once viable fishery. The former Apex predator Lake Trout were becoming decimated by the voracious appetite of the parasitic lamprey. Lake Trout, White Fish, Lake Herring and Chub populations were almost brought to the brink of extinction. Reported Lake Trout harvests in the early 60’s were down from annual amounts surpassing 15 million pounds to mere reports of 300 thousand. 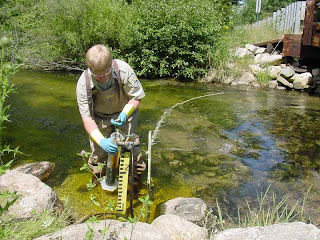 Virtually every fish caught showed signs of lamprey attacks with some bearing witness to as many as 10 or more encounters. Invasive Alewife populations exploded as a result of predation losses which in turn brought stressors to other native species. The entire ecosystem was on the brink of collapse and drastic measures were needed before there was no return. The governments of Canada and the US formed a coalition to fight off this threat. Thus the birth of the Great Lakes Fishery Commission. In 1958 after the testing of an estimated 6000 compounds the commission scientists finally developed TFM (3-trifluoromethyl-4-nitrophenol) or Lampricide as it is commonly referred. Now the commission had an effective means of controlling the voracious parasite. Over an aggressive 40 year campaign the Commission managed to reduce the lamprey populations by as much as 90%. This program accompanied by aggressive stocking initiatives saw resurgence in the sports and commercial fisheries. The program enjoyed great success complimented by further developed non-chemical measures like Electric Weirs, Dams, and the more recent Male-Sterilization initiative. While the threats in the lower lakes were under control the recent Health and comeback of the St Mary’s river began to give an edge to the Lamprey once again. The once murky and heavily polluted waters of the St Mary’s river were seeing resurgence. The river health was coming back as was Lamprey habitat. 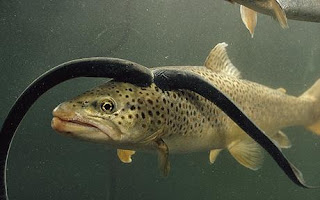 The sheer size and volume of the St Mary’s made viable deployment of TFM ineffective and the Lamprey began a strong resurgence. The St Mary’s river proved to be as much as 25 times larger than any river the Commission had successfully treated in the lower lakes. The Lamprey were undertaking their spawning and larval stages in the lower St Mary’s river where in turn they would undergo metamorphosis and deploy to upper Lakes Huron and Lakes Michigan. The problem was prolific with estimates of lamprey populations rivaling those of the pre-TFM era. Once again the Great Lakes Fishery Commission had to look for a cost effective means at regaining the upper hand. Through the utilization of modern global positioning and deep water technologies key larval rearing hot spots were established and treated with deep water slow release lampricides such as granular Bayluscide. Also through a partnership with the US Army core of engineers Lamprey traps were built on the river and an aggressive Male Sterilization program was undertaken. 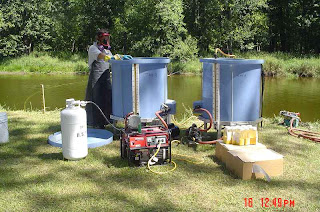 This program see’s fertile captured males sterilized and re-released to compete with remaining fertile males for active mates thus reducing the amount of fertilized lamprey eggs and subsequent hatched larvae. Once again the commission was gaining the upper hand and the populations were coming into check with the lower Great Lakes. To this day the St Mary’s river is deemed as the Lamprey Hotspot in the Great Lakes. Consensus has been met that the Great Lakes will never rid themselves of this parasite but a sustainable healthy fishery can be maintained with vigilance, proper management, and determination.  One can only imagine where the Great Lakes would be today without the determination and commitment of the Great Lakes Fishery Commission.  With modern day invasive threats on our door steps we can rest assured that the best in the game are on it and are prepared to do battle to protect our precious resource.

**Lampricide application images from Luddington Division of DNR applying TFM on Pere Marquette**
**Other Image credit goes to Google...thanks Google your the best!***
Posted by lambton at Tuesday, June 14, 2011

scray how many invasive threats we have skated past in the great lakes. we might not go so lucky next time?

I once had a lamprey on my nuts...