"that rabbit out of a hat" 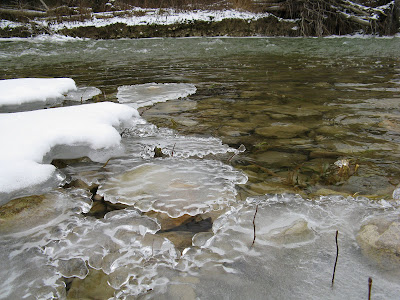 Having just returned from a 4 day trip to Nevada I was eager to hit the home waters with Norland. I had sent Gene an email from the McCarron International Airport prior to my flight leaving informing him I would be good to go for Wednesday morning. As reality would have it I was exhausted from the trip and flight and had to bail on our plans. True to his insane nature Gene ventured up Wednesday himself and found favourable results. With the daunting weather outlook I was on the fence as to force the issue for Thursday and take the chance at a complete write off. After a brief email exchange that involved a great deal of emotional and irrational logic we decided to make the drive up the lake for what might possibly be the last shot at fishing our beloved little river. If for nothing more this trip would afford the company of a great friend, immature and insane conversation, an arduous but beautiful walk through the bush and maybe...just maybe a chance at one more jewel from the shire. 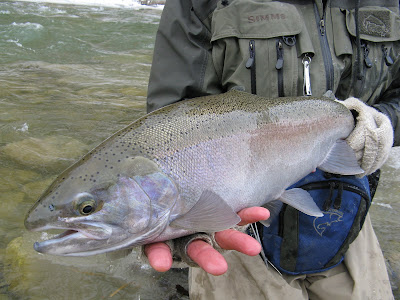 In typical form we arrived, geared up and make the long hike. The forest was quiet and covered in a blanket of white snow. We walked on no others tracks and a peaceful feeling set across me. There is a vantage point on our little river that affords a panoramic view of the river and surrounding forest. We made our way to this cliff and peered over the edge with anticipation of a free and flowing river. To our surprise the river was flowing strong and appeared to be reasonably slush free. A feeling of jubilation set across our bodies and like children before Christmas we rushed down the hill towards the river for a better view. 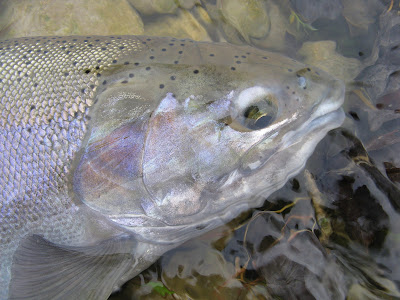 To our dismay there was some slush flowing but we felt we would be able to deal with it. With the assumption that the slush would only get worse prior to better we made the long hike to the top end where Gene had positive results the day prior. This hike can be a test on normal days but combine the increased clothing and constant buildup of snow on the wading boots it was certainly taking its toll on our bodies. We finally managed to arrive at our destination. The run looked fishable but the slush was starting to really become a factor. After a 15 min session a feeling of hopelessness was beginning to set over me. In conditions like these our manor of fishing is really put to the test. We found ourselves way back in the bush with water that was virtually unfishable. We decided to hike up to a faster flowing run that might offer us an option. To our surprise the slush was flowing in a manor that allowed us to get our offerings down somewhat successfully. This combined with an increased bulk shotting approach proved to be the ticket. A few drifts in with a pink worm my float drops. Instinct takes over and its fish on. For the conditions being as harsh as they were this fish fought like a champion taking me well down river where we finally managed to put her on the bank. She was very beautiful and displaying that titanium colour some take on in the extreme cold. After a few quick pics she was returned unharmed to where she came. 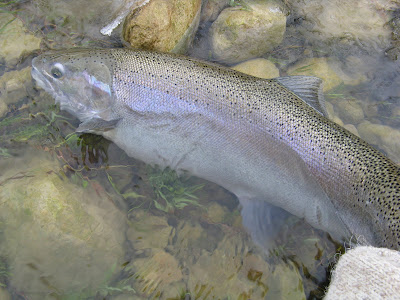 This fish was a real confidence booster at a time when all things were starting to look hopeless. This fish was the shot in the arm we needed and we decided to hike down to the Drive-inn run. Our luck this season has been minimal to none at this run and I had a feeling we were due. In no time Norland hooks up and blows a fish. Hanging in there he makes a few more drifts and hooks up again. This fish is sounding in the deep emerald abyss of the Drive-inn and we get the impression that it is a decent sized buck. True to our suspicions it was and in full winter colours. This fish takes Gene for a long walk down river, under trees, and into rapids where Gene manages to one hand him in the middle of the river. 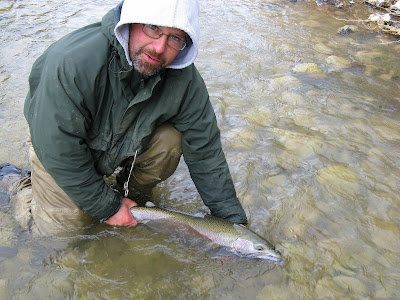 This fish is big, strong, and ...ugly! LOL!!! Well we will say he had a face only a mother could love. Kinda like Norland. I actually said "Gene, you caught a fish that looks just like you!" But seriously...this fish was stellar and a survivor. After a few pics he raced back into the river to live another day. 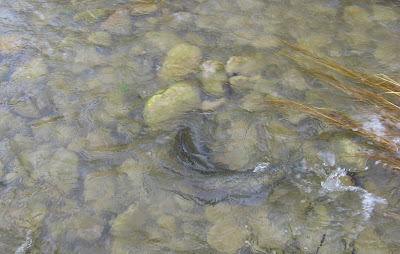 By now our expectations were surpassed. We both put quality fish on the bank. We got some nice pics, had a tonne of laughs and were getting ready to make the hike out. We decided to walk by this new run Norland discovered a few months back that I had only fished once with him. This run is very "Sexy" as Gene would say and warranted a look. I didn't think we would be able to punch through the slush parade here but it was worth a look. I started fishing the middle section to no avail. We decided to leave and walked by the tail out. We were just about past it when I said "Hey...lets give it a shot" It looked awesome and worth an attempt. It wasn't 5 drifts and Gene blew a fish. Another 5 drifts and I hooked up on a chrome hen. It was awesome to see her flash in the emerald water below the slush.

The slush was coming down pretty good and the mainline would cut it in two as the fish raced throughout the run. After a surprising long battle we managed to persuade her on to an ice shelf.
She was beautiful and made the trip. Before I let her go I gave her a kiss and wished her all the best. This might be my last fish of the season I proclaimed as she jetted back in to the "Mitchell Run".

The Kiss from Brian M on Vimeo.

We missed a few more fish then I hooked up again. This fish fought fairly decent but came to hand reasonably quick. We wondered if it was possibly the same fish. After photo comparisons later that night it was confirmed. LOL!! I caught the same fish twice. That counts as two doesn't it? ;0) We fished for a little while longer and decided to head out. On the way out Gene spotted the bald eagle. It was my first time seeing him this year and it added to the allure of the day. Rounding a corner we discovered a dead Coho on the ice half eaten and surrounded by raptor tracks in the snow. We had to assume the eagle had been preying on this fish and we spooked him away as we approached. It never ceases to amaze me what one will find when hiking in the shire. 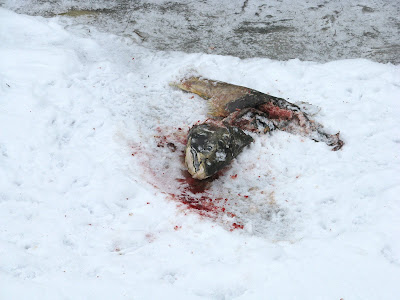 The remainder of the hike out was brutal. Actually I can never recall a hike that has taken it's toll on me as much as this one. I like to think I am in reasonable shape but Gene is beginning to convince me that our quality days of "hitting her hard" are short lived.
Arriving at the car there we no chance of getting the now frozen wading boots off our feet. With a sudden burst of inspiration and ingenuity we decided to hit the local car wash for a de-thaw of sorts. I had to chuckle at the stares of horror from the older gentlemen in the adjacent stall as he watched us power wash our waders and boots while he cleaned his car. I'm certain he will be telling that story for a long time to come. For us it was pure genius and got us on the road home. Well... after a quick stop at Zehrs Country Market for some outstanding Mennonite baked goods and meat products that is. 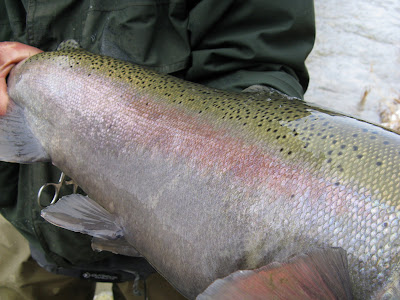 This trip was bordering on the edge of catastrophic from a fishing stand point. I would have never guessed we would have had such a fantastic day. It just goes to prove that with true determination and perseverance one can pull that rabbit out of the hat. As I type this our little river may very well be locked up. This may have been my last trip up and that makes me very sad. If conditions change and we are blessed with another opportunity I hope to take advantage of it. If not this day was a stellar ending to a very short season. We are lucky to have special places like this in our world. Places where one can find peace with ones self and where one can become in tune with nature. We really are lucky... 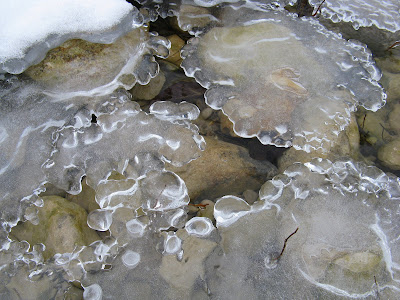 I was weird to see you kiss that fish...
Why on the anus of all places???

Irrational conversation?
I would prefer to think of them as rare moments of clarity.

My spine is broken. That fall wouldve killed you ..
You are a POS

You survived that fall mainly in due to the fact that you are not human! It was all I had in me to not pee my pants laughing at that circus act. Two falls in 30 seconds...Priceless :0) Had you been rendered more useless than you are I would have certainly fished the remainder of the day prior to carrying your pathetic corpse out of there. I considered leaving you but that would have been like leaving a cheeseburger for the eagle. Junk food! ;0)

I can't believe you tired to slide that chromer the tongue - you are a POS!!

I bet you killed the damn rabbit so 'cheeseburger' could tie jigs with it.

Nice...
Well I guess I set you up for all of those slams ;0) Good work indeed!

Awesome Brian. You and Gene are truly hardcore. I think the only times you guys score goose eggs would be because there are no fish to catch. Otherwise, the playing field is simply unmatched. ;) (Cue the clapping of the "Wiserhood")

i wood have made loveth to the sammon remains