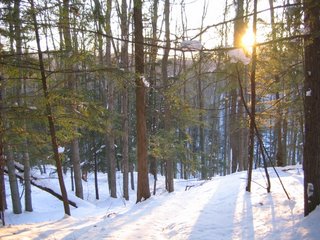 Well it has been a long time comming. I almost didn't think it was gonna happen to me this year but it did. I guess I needed it, but not as badly as it was served today! Yes the dreaded s-word :-0 It just hurt typing that sentence and reliving the days events but here goes...
Out the door at a reasonably decent hour to arrive at the parking spot with not so much as a sign of human activity in the area. I suited up and started my trek back to the bush through 3 ft drifts of fresh powder. Arriving at the bush exhausted, I started to venture down the beaten trail following the abundance of fresh deer tracks. The trek back was extremely exhausting and I had to take multiple breaks along the way. I guess it's time to hit the gym again!!! 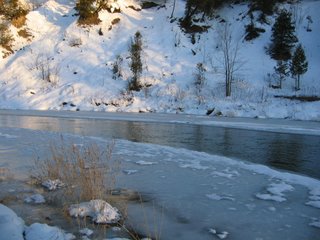 I arrived at my starting point to find a mere 5ft open channel down the entire holes duration. I figure better than nothing and get my line in the water eagerly awaiting the first take but it doesn't happen. This scene is to repeat itself over and over again to the theme of 5 highly productive runs. Today I walked what seemed like a million miles thru a foot or more of fesh powder. What was to be my saving grace, proverbial light at the end of the tunnel, was the top run. There are always fish to be had there just ask G! But today I arrive there to find that 3 gentlemen had hiked in an alternative route and had fished it out. Good for them although I could have "punched them each in the throat" Trotsky style. Destiny I thought to myself. No sense in fighting it. I just hope it's behind me ;0)
Posted by lambton at Sunday, December 10, 2006

You disgust me.
Those "gentleman" didn't happen to be drinking Busch beer by any chance?

Funny. Same thing happened to me in the east. Lots of Busch beer. No fish.

Quiet possibly due in part to all the recent harassment for a certain "book-end" I have that you want ;o)

I was reluctant to comment SD but since you brought it up...
Intersting indeed...you start hooking fish again and numbnuts puts up a donut!!!!
Well done witchdoctor ...well done...
Dig the Voodoo....

I want my frickin mojo back Dr Evil! Throw me a frickin bone here :0)

Ma dug up a favour from an ole Bayou friend mon.. She be sayin.. you 'ad caught too many fesh & it was time fer a 'pankin, to be puttin jah in yer place mon... :o)

Seriously... remember that Purolator ad on TV recently ?? "We Do VooDoo" ...

I placed an order several weeks back, guess ya figured it arrived recently huh ?? LOL ;o)